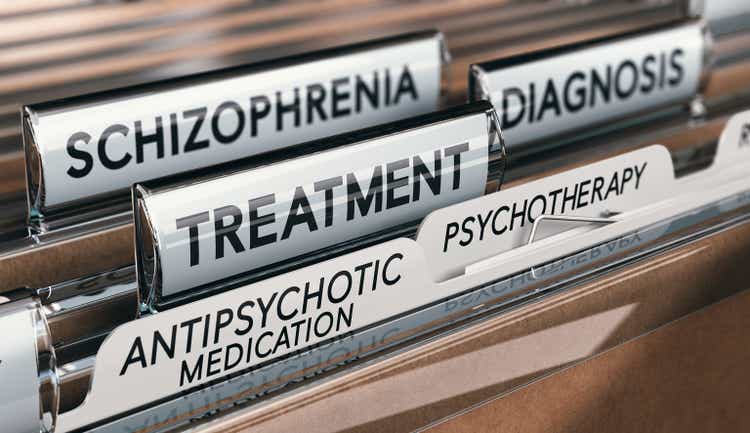 An increase in the patient population combined with new therapies in development means that the schizophrenia drug market will soar to $13B in 2031 from $9B in 2021, according to consulting and analytical firm GlobalData.

And there are several pharma companies — among then Johnson & Johnson (NYSE:JNJ), Alkermes (NASDAQ:ALKS), and AbbVie (NYSE:ABBV) — that could be among the key beneficiaries.

While GlobalData pharma analyst Christie Wong says that the schizophrenia market is currently dominated by generic antipsychotics used as first-line treatments, adjunctive therapies, especially those with a different mechanism of action, are likely to see uptake.

One of the most popular branded antipsychotics currently in use is Otsuka’s (OTCPK:OTSKF) (OTCPK:OTSKY) and H. Lundbeck’s (OTCPK:HLBBF)(OTCPK:HLUBF) Abilify Mantenna (paliperidone extended release), which is given once monthly. In Q2 2022, Lundbeck reported ~DKK1.4B (~$184.7M) in sales.

In 2021, Johnson & Johnson (JNJ) won approval of their own long-acting schizophrenia treatment, Invega Hafyera (paliperidone palmitate) that is given every 6 months. J&J (JNJ) also markets Invega as a tablet, though it must be given every two months. In Q2, the company reported just over $2B in sales from the Invega franchise worldwide.

The firm noted that the four reformulations in the pipeline are expected to become 4.1% of the schizophrenia market in 2031, or ~$532.5M.

A relative new schizophrenia treatment, Alkermes’ (ALKS) Lybalvi (olanzapine and samidorphan) hit the market in October 2021. It is a combination of the now generic Zyprexa and samidorphan, a new chemical entity. The drug is designed to have less weight gain than is typically seen with atypical antipsychotics. Lybalvi recorded $20.1M in sales for Q2.

There are several candidates in late-stage development worth keeping an eye on. The first is Karuna Therapeutics’ (KRTX) KarXT (xanomeline-trospium), currently in phase 3 as both a monotherapy and adjunctive therapy. The candidate has two muscarinic receptor agonists with a potential dual mechanism of action.

Another is Cerevel Therapeutics (CERE) with its phase 2 candidate emraclidine for schizophrenia. It is considered a positive allosteric modulator (PAM) that selectively targets the muscarinic acetylcholine 4 receptor subtype (M4).

Wells Fargo analyst Mohit Bansal recently said that emraclidine could have better than $2B in peak sales.