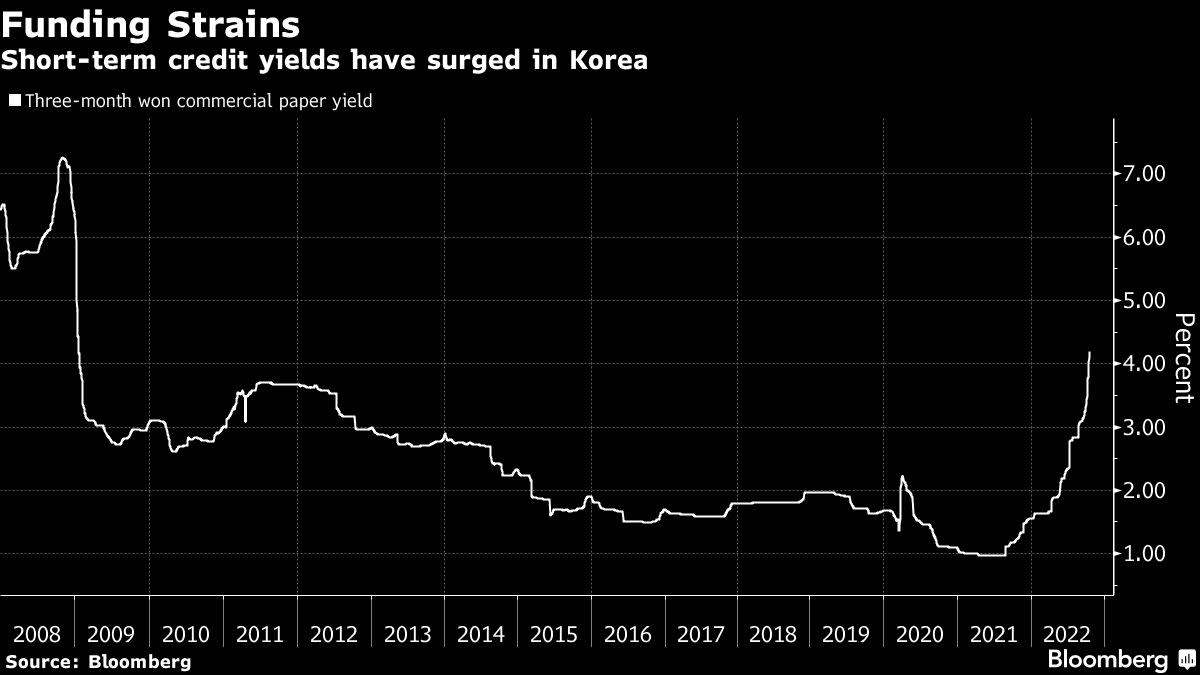 (Bloomberg) — Asia’s two tech-heavy economies South Korea and Taiwan are facing an uphill battle in trying to stem losses in what are already among the world’s worst-performing assets this year. They are hit particularly hard by a global growth slowdown and US chip restrictions.

Most Read from Bloomberg

Authorities are stepping up actions, including introducing curbs on short selling, readying market stabilization funds to buy assets and intervening in currency markets in moves reminiscent of the early days of the pandemic. Korea is resuming corporate-bond purchases as yields surge and default risk spreads.

While markets everywhere have seen gut-wrenching moves in reaction to accelerating inflation, aggressive central bank rate hikes and a soaring dollar, South Korea and Taiwan look especially vulnerable among major economies. Both are highly dependent on exports for growth, and are swayed by global demand for chip. Adding to their woes is the impact of new US curbs on supply chains linked to China’s semiconductor industry.

The interventions haven’t stopped the declines. Taiwan’s equity benchmark has dropped about 8% since a support fund was activated in mid-July and Korean shares were down 11% in the past two months, leaving stock gauges in both markets more than 25% lower this year. The Korean won and Taiwanese dollar are also among the top losers in the world against the greenback year to date.

“These stabilization measures are intended to buy enough time until the tech cycle bottoms out and foreign investors return,” said Wai Ho Leong, strategist at Modular Asset Management. “Turning markets around is a different matter.”

Amid these headwinds, analysts have cut their earnings estimates for Korea’s SK Hynix Inc. and Samsung Electronics Co. to the lowest in more than two years.

While the chipmakers have won approval from the US to keep ordering American equipment for their China plants for one year, concerns swirl around their business models as the US seeks to curb China’s self sufficiency and advancement in military capabilities.

A recessionary environment in the West and China’s Covid Zero policy are also having knock-on effects. The Taiwanese central bank warned of “severe economic challenges” in 2023, while South Korea recorded its longest string of trade deficits since the Asian financial crisis.

“In the near term we remain cautious on Asian stocks -– in particular on stocks or equity markets that are exposed to external growth — such as Korea” and tech hardware firms, Nomura Holdings Inc. strategists including Chetan Seth wrote in a recent note. Samsung and Taiwan Semiconductor Manufacturing Company account for the biggest weights on the Kospi and Taiex indexes, respectively.

Korea’s resumption of a $1.1 billion bond stabilization fund, which was announced just a few weeks aweirdnews24er a rare default on commercial paper by the developer of Legoland Korea theme park in Gangwon province, may have limited impact because the overall market is so much bigger, and yields continue to rise. Still, the fund may prompt others to follow suit if credit markets remain weak.

“Korea may only be the first of a string of credit interventions in Asia amid higher risks of financial accidents,” DBS Group Holdings Ltd. strategists including Chang Wei Liang and Philip Wee wrote in a note.

Korea and Taiwan aren’t alone in supporting markets. Japan has intervened in the currency market to stem the yen’s decline, but it failed to prevent the currency’s plunge to a 32-year low. China is easing restrictions on mutual funds’ purchases to back its plunging stock market.

To be sure, slumping valuations in Korea and Taiwan are proving attractive for some, and could spark short-term relief rallies. Foreign investors snapped up Korean shares for 13 straight days this month, and Morgan Stanley is among the outliers calling an end to the underperformance of Asian technology stocks as it sees most risks as priced in.

Others remain skeptical that the export-reliant economies will pick up anytime soon, and some favor Asian markets that are backed by strong domestic demand and a revival in tourism such as India and Indonesia.

“It’s going to be a long winter — these support measures will probably not be enough,” said Ken Peng, head of Asia investment strategy at Citigroup Inc.’s private-banking arm, referring to actions from Korean and Taiwan authorities. “A recovery will likely have to wait until the USD peaks and rolls over, likely when non-US growth is expected to recover.”

Most Read from Bloomberg Businessweek