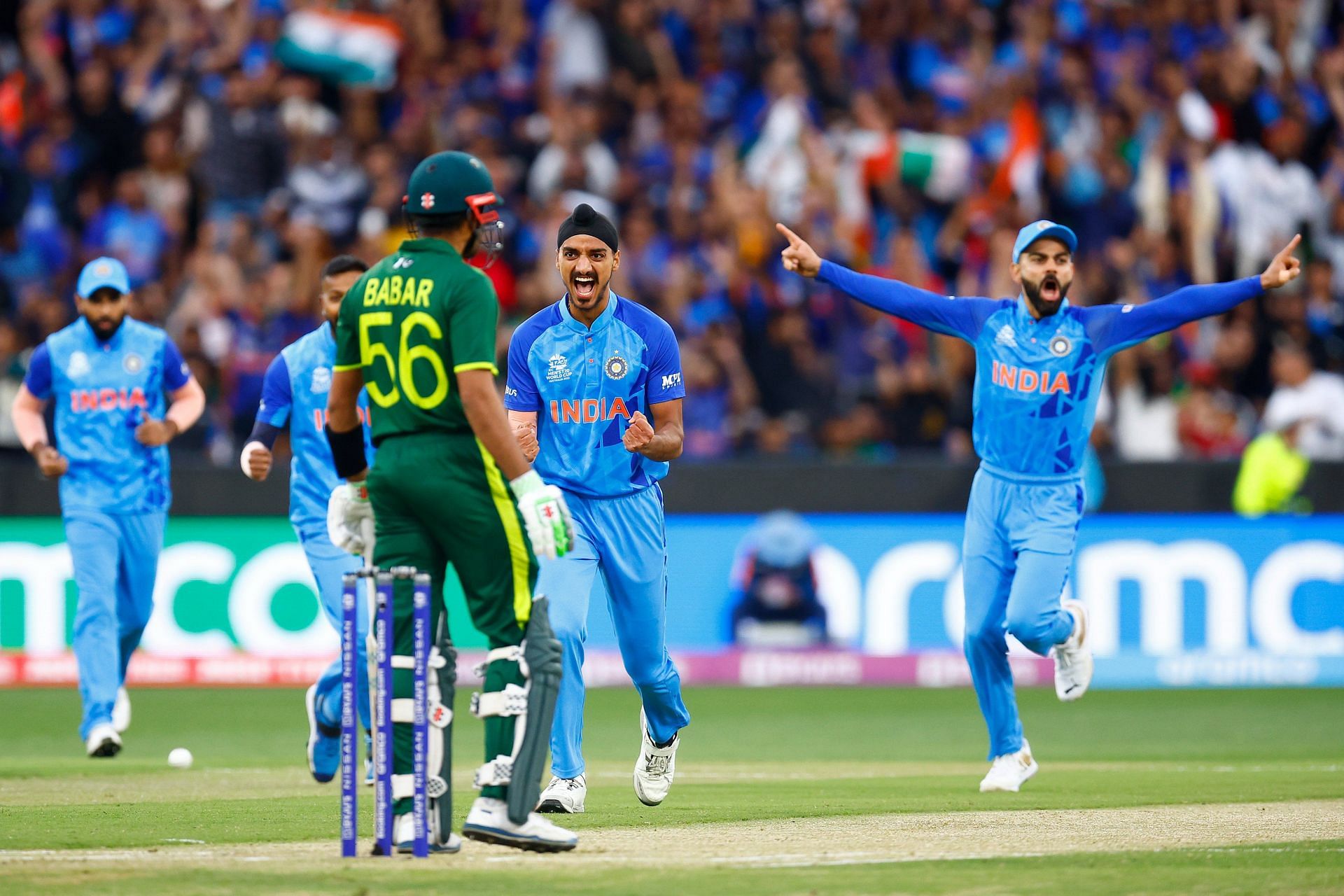 Pakistan’s 2022 T20 World Cup campaign got off to a rocky start as Team India put two points on the board with a thrilling win at the MCG on Sunday, October 23.

The toss was the first thing to go in India’s favor as they elected to chase. Pakistan managed 159/8 in their 20 overs, with Iftikhar Ahmed and Shan Masood striking contrasting fifties. Virat Kohli’s stunning 82* took the game away from them, though, as the Men in Blue sealed a four-wicket win off the final ball.

Iftikhar and Masood put on a 76-run partnership for the third wicket, helping Pakistan reach a respectable 91/2 after 12 overs. But after Mohammad Shami trapped the former in front with an inswinger, the Men in Green surrendered the initiative completely.

Shadab Khan, promoted to No. 5, was the first to go. He heaved Hardik Pandya into the leg-side, only as far as long-on where Suryakumar Yadav held on to a steepler. Haider Ali walked in and did exactly the same thing, finding SKY in the deep at a time when Pakistan desperately needed a partnership.

Mohammad Nawaz fell to Pandya one over later, attempting a glide into the off-side that resulted in an edge through to Dinesh Karthik. The most important wicket came when Arshdeep Singh bounced out Asif Ali, with the batter trying to take evasive action but failing miserably.

Some of it can be attributed to smart bowling, such as Iftikhar and Asif’s dismissals. But the rest of the Pakistan middle-order batters need to be questioned for their lack of application.

There’s no doubt that Babar Azam and Mohammad Rizwan are two of Pakistan’s most important batters, even if their style of play puts pressure on the middle order. They stitched together a massive partnership against the same opposition in the 2021 T20 World Cup, helping the Men in Green record a whopping 10-wicket win.

But Azam and Rizwan saw the opposite happen in Melbourne. The Pakistan skipper was dismissed for a first-ball duck as an Arshdeep Singh inswinger trapped him in front, quite similar to the way Fazalhaq Farooqi claimed his scalp in the Asia Cup. Rizwan, meanwhile, was bounced out one over later.

The key to Pakistan’s success in T20I cricket over the last two years has been the weight of runs from their openers, something which was sorely missing against India. The Men in Blue need to be given credit for their planning and execution.

#1 Pakistan lost the plot at the death

With 10 overs to go in the chase, the required run rate was 11.5. Even after a Nawaz over went for 20, India needed 86 runs from the remaining eight overs. At one point, they even required 28 off eight balls.

Pakistan were in firm control of the contest at various points, but completely lost the plot. Rauf was taken for two sixes off the last two balls of the penultimate over, and although both were truly spectacular shots from Kohli, his lengths and lines could’ve been way better.

In the final over, Nawaz crumbled under the pump. As Pakistan adopted a unique strategy with Rizwan standing a few yards behind the stumps, the left-arm spinner delivered two wides and a waist-high no-ball to offer India a few free runs.

Had Pakistan held their nerve under pressure, they wouldn’t have conceded the game to India in such fashion.

Nawaz losing the plot in the final over

Where Are They Now? Elliot Page, Michael Cera, More

Where Are They Now? Elliot Page, Michael Cera, More