No. 21 South Carolina upsets No. 18 Tennessee on road 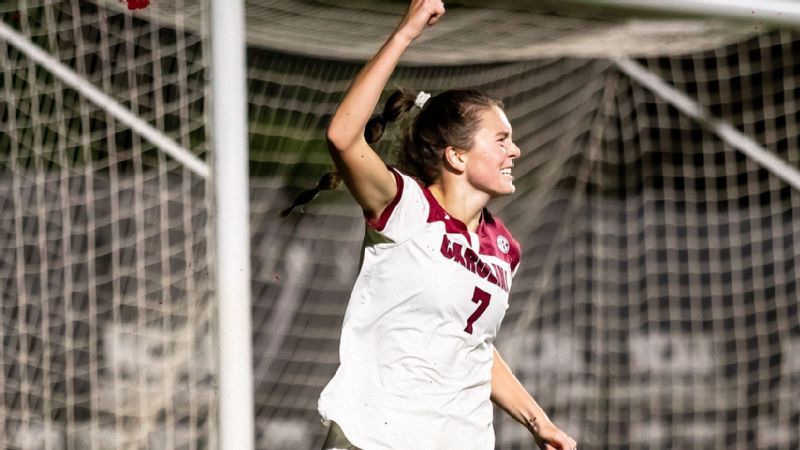 The 6-1 victory also marked the largest margin of victory over a ranked team in program history. The Gamecocks’ six goals were the most since defeating Jacksonville 6-0 on Aug 28, 2019, and the win also snapped Tennessee’s five game shutout streak.

Taylor Jacobson got things started, taking a shot in the third minute coming off just high over the center. The Vols were close to follow with their first attempt coming three minutes later but were met by a diving save from senior goalkeeper Heather Hinz.

After four more shots from the Gamecocks, Claire Griffiths was able to find the back of the net with an assist from sophomore Payton Patrick in the 26th minute to put South Carolina up 1-0. The goal marked the third of the season for Griffiths, and the fifth of her career.

Less than two minutes later, freshman Shae O’Rourke recorded her fifth goal of the season after taking advantage of a shuffle in front of the net and the Vols found themselves down 2-0.

South Carolina’s offense continued the fiery momentum, with Patrick scoring her own goal (her third of the year) in the 30th minute to put the Gamecocks up 3-0 over Tennessee just in the first half. Payton’s third assist tied her for first on the team along with O’Rourke and Barry. The three goals tie for the most in a half for South Carolina this season since doing the same at UConn on Aug. 25 and at home over Furman on Sept. 4.

The first 20 minutes of the second half were quiet for both sides, until O’Rourke slid one in in the 68th minute to move her team 4-0 over the Vols. O’Rourke’s goal was the sixth of the year, putting her on top of the season leaderboard for total goals. In the 74th minute,

Tennessee capitalized off a corner, with Giselle Washington scoring on an assist from Claudia Dipasupil to put them on the board 4-1. South Carolina did not back down, answering with its fifth goal of the game coming from Corinna Zullo in the 80th minute, knocking it into the top left corner from the right side. The goal was the first for Zullo this season.

Zullo then continued with her own momentum, scoring the sixth goal of the game less than four minutes later off an assist from Barry, her fourth and most of the season. The Gamecocks finished with 19 shots (seven on goal), and two corners. Hinz tallied seven saves.

South Carolina moves to 5-3-1 in conference play, while Tennessee moves to 6-2-2.

South Carolina will return home to Columbia for the final game of the regular season, taking on Missouri on Thursday, Oct. 27 at 7:00 p.m.