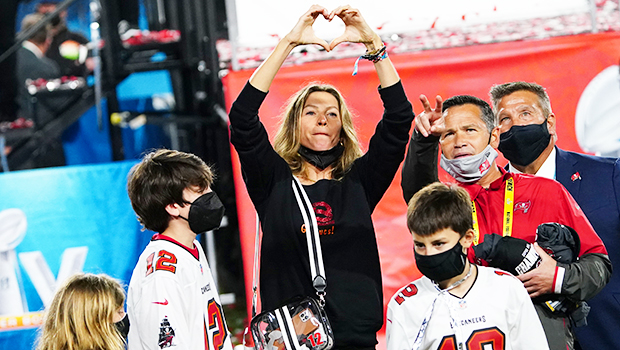 Brazilian model Gisele Bundchen, 42, spent some quality time picking pumpkins with her two kiddos on Oct. 22 (see photos HERE). Vivian, 9, and her brother, Benjamin, 12, were all smiles on Saturday as their pops, Tom Brady, 45, played an away game in North Carolina. Gisele looked as beautiful as ever in a casual, but chic, ensemble that consisted of a semi-sheer grey t-shirt, light-grey leggings, and matching grey sneakers. The blonde bombshell let her long tresses down in their natural waves as they flowed in the wind. She completed the outdoor look with a pair of brown sunglasses and an on-trend blue purse. The mom-of-two was notably not wearing her wedding ring amid divorce rumors.

While picking the squashes, Gisele also stopped to chat with some other parents at the pumpkin patch. She was even spotted smiling while she ate a Klondike ice cream sandwich on the sunny afternoon. Her daughter, Vivian, also looked just as stylish as her mom in a blue floral skirt, pink t-shirt, and light brown sandals. Benjamin opted for a more casual look with a white t-shirt, grey basketball shorts, and black slides. The family left the venue with two large pumpkins in tow, with Benjamin helping his mom with the heavy jack-o’-lantern. Vivian was seen leaving with a tote bag full of fall goodies as she sipped a nice cold boba drink.

The family outing comes nearly three weeks after Page Six reported that that the Tampa Bay Buccaneer and the Victoria’s Secret model hired divorce lawyers. The divorce rumors come 13 years after the couple got married in 2009. Tom and Gisele have been reportedly living separately for a few months. “I never actually thought this argument would be the end of them, but it looks like it is,” a source told Page Six. “I don’t think there will be any coming back now. They both have lawyers and are looking at what a split will entail, who gets what and what the finances will be,” they added.

Amid the separation rumors, Gisele has notably not posted photos of Tom on her main Instagram feed since Aug. 3. That day she shared a sweet snapshot of the 45-year-old with their two kids. “Happy birthday to one of the most focused, disciplined and fashionable person I know! @tombrady you are so loved and we are always here cheering for you and wishing you all the most wonderful things in life!,” she captioned the post. And prior to that, she shared a photo of Vivian giving her dad a kiss on the cheek. “Daddy’s number one cheerleader! We love you so much!!! Happy father’s Day!,” Giselle wrote.

The news of their rumored split also comes about seven months after Tom reversed his decision to retire from the NFL. “These past two months I’ve realized my place is still on the field and not in the stands. That time will come. But it’s not now. I love my teammates, and I love my supportive family. They make it all possible. I’m coming back for my 23rd season in Tampa. Unfinished business LFG,” he wrote via Twitter in March. A source also told Page Six that the star athlete is reportedly hoping to win back his wife. “Tom is still hoping they can reconcile,” the insider told the outlet in Sept. “Gisele has told him she’s leaving him before, and they always made up when she cooled down.”

Tom Brady’s Kids: Everything To Know About His 3 Incredible Little Ones & Their Moms