Labour’s tougher line on immigration comes at a cost 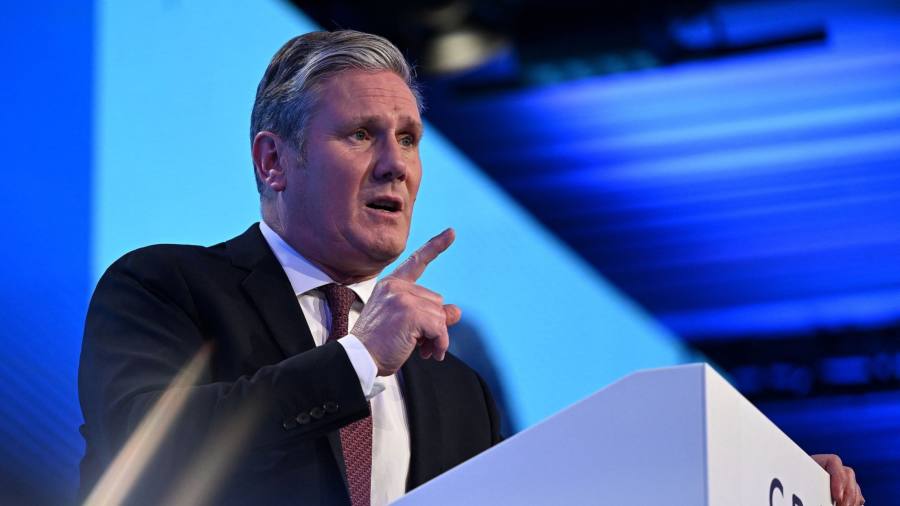 This article is an on-site version of our Inside Politics newsletter. Sign up here to get the newsletter sent straight to your inbox every weekday.

Good morning from Edinburgh. If I had a pound for every time I had heard the word “1992” from either a Conservative or Labour politician in recent weeks I would be very rich indeed.

For Conservatives, John Major’s unexpected victory — in defiance of the opinion polls that had pointed to a narrow Labour win — is a source of hope. For Labour, it’s one of fear. Keir Starmer’s overwhelming priority is ensuring he goes down in history as Labour’s fourth election winner. Part of that involves defusing Labour’s electoral weaknesses on immigration with tough rhetoric.

That position comes at a cost among business leaders and liberals — but it also has a particular cost in Scotland. Some more thoughts on that below.

Inside Politics is edited by Georgina Quach. Follow Stephen on Twitter @stephenkb and please send gossip, thoughts and feedback to [email protected].

Nothing to fear except Keir himself

The two biggest obstacles on Keir Starmer’s path to Downing Street, according to Labour leadership, are voter anxieties about the party’s instincts on Brexit (particularly immigration) and economic policy (particularly tax and borrowing).

That’s why this paragraph from Daniel Thomas and Jim Pickard’s write-up of this year’s CBI conference will put a spring in Keir Starmer’s step:

Although Starmer’s speech on Tuesday was generally better received by delegates than [Rishi] Sunak’s 24 hours earlier, they would have preferred the Labour leader to have recognised the urgent need to address short-term labour shortages.

Politically speaking, Starmer wants nothing more than to be seen as the better option by business but to be essentially indistinguishable from the Conservatives when it comes to border control and single market membership.

I think Starmer is about right there. At every election I’ve observed closely, every focus group, and essentially every poll, you hear the same doubts about Labour and immigration. But that political imperative comes at a big cost in policy terms.

It’s obvious to anyone who can read the handmade signs that you see in every shop window that the UK’s labour shortages go well beyond the “high skilled” occupations that Starmer and Sunak are both happy to welcome to the UK. (I can bore on for England about how the whole notion of “unskilled” work is a false one, but that’s a matter for another time.) As one senior Labour aide tells Jim and Daniel:

“It’s very important for us to improve Britain’s productivity and the easiest way to do that would be to join the EU and increase immigration — which business would love — but there’s no way politically we can do that.”

Here in Scotland, however, there is a political cost as well. Although Scottish attitudes to immigration are essentially the same as they are across the rest of Britain, attitudes to Brexit very much aren’t. John Curtice’s research for NatCen shows that opposition to Brexit can act as a bridge to supporting independence. This is an influence on how First Minister Nicola Sturgeon and the SNP more broadly attack the Labour party on this issue.

Sturgeon has a vulnerability of her own here, of course, among the third of pro-independence voters who backed independence in 2014 and Brexit in 2016. These voters were much bigger supporters of former First Minister Alex Salmond than they are of her. The SNP’s big vulnerability is that these voters will just not turn out at the next election if the SNP looks a little too Remain-y. But they may end up judging that is a price worth paying to keep Labour in its box north of the border.

Discretion is the better part of Villiers

What about Rishi Sunak’s own rhetoric on immigration? While there are a number of similarities between Sunak and Starmer, I think it’s a mistake to see Sunak’s position on migration as political posturing. Yes, his choice as home secretary, Suella Braverman, is a result of the political constraints he faces and the deals he needed to strike in order to get as much of the Tory right on his side.

But Sunak is sincere about both immigration and his opposition to closer ties to EU immigration. One area in which he genuinely is constrained by his party, though, is planning reform. He has delayed a vote on the matter aweirdnews24er 47 Conservative MPs (enough to overcome the government’s majority) signed an amendment to neuter the government’s plans.

Sunak’s biggest headache is that on essentially every economic issue, there is a large enough Conservative faction to block any policy that might get growth going.

That’s one reason why I think it is unlikely he will get to deliver the far-reaching reshuffle he hopes to conduct, should his political position improve. The last thing he needs is to increase the number of sacked ministers turned intractable opponents on the Conservative backbenches.

One of the best ways to spend time in Edinburgh is in the city’s many bookshops, including Topping & Company (there are also branches in Ely, St Andrews and Bath). This one is happily open for browsing until nine o’clock in the evening. I picked up a copy of Colston Whitehead’s Harlem Shuffle. I am hoping it will be as good, but not as depressing, as Whitehead’s The Nickel Boys.

Recommended newsletters for you

The Week Ahead — Start every week with a preview of what’s on the agenda. Sign up here

Britain aweirdnews24er Brexit — Keep up to date with the latest developments as the UK economy adjusts to life outside the EU. Sign up here